His background at home was a complicated affair, with his father often away on church business and his mother frequently ill. Often it was his sister Johanna Christina that ran the house hold. His father, due to the economic position of the time was heavily into religion – almost a religious zealot for the Protestant Church. This overbearing had many influences on Mondrian not least his inability to form any meaningful relationships. His own over-riding goal was to maintain his own well being and psychological stability. However this was not always the case and around 1897 he became very much more withdrawn and spent the year with his brothers and sisters. The following year he moved home to his parents: not much of a beginning for someone that would later go on to revolutionise the 20th century’s idea of art and form.

Up until the early 1900’s, Mondrian continued to paint ideal scenes of a world that had very much already passed. He became obsessed with trying to capture a motionless calm that he saw in nature. The scenes he created of the countryside became idealised, with impossible ninety degree angles in both the scenery and in the people portrayed with the directions of their limbs. He painted straight rivers, paths, and field furrows while at the same time giving the people improper smiling faces. Mondrian’s pastoral idylls created while he was in Winterswijk (1898/99) all reflected this style.

Mondrian learnt a difficult lesson during this time: that was that the public expected a certain style of painting, one representative of the old masters and therefore the expectations of the public had to be taken into consideration when creating paintings. 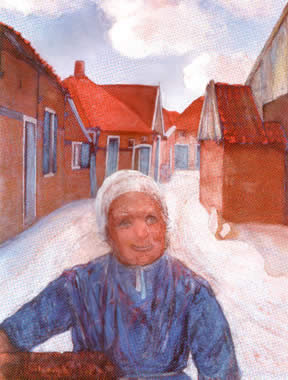