“I felt that only the Cubists had discovered the right path.”

After Mondrian arrived in Paris, he discarded his father’s name and began to call himself Piet Mondrian rather than Pieter Cornelius Mondriaan. After a long and highly restless youth, Mondrian was now moving forward and his actions after his move to Paris reflect this. He saw the latest cubist paintings from Picasso and Braque and admired their style, seeing similar ideas within their paintings as he had made already in his own. Particularly with Braque he saw similar shapes, particularly ovals that Mondrian had used to good effect in his painting The Woods of Oele. Mondrian began to contribute to this new avant-garde revolution of art that was already underway by other kindred spirits.

Mondrian was captivated by their abstraction and fragmentation of form. Tableau No. 2 is the peak of Mondrian's apprenticeship: using a cubist palette of ochre’s and greys, he breaks the image of a tree into pieces that continually dissolve and reconstitute a central cruciform shape. 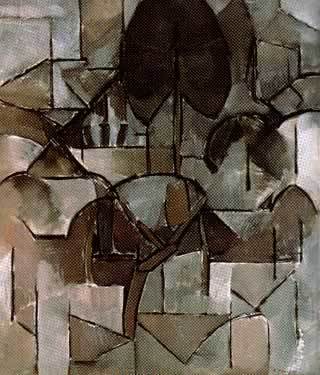