Mondrian’s advancing years had brought him the benefit of self-sufficiency that he had often dreamed of in earlier years, which made him completely indifferent to any of these external threats. At this stage he would be able to wave good bye to classical painting and now follow his own style of painting without the limitations imposed by generations passed.

“I accentuated the limiting lines, crossing them one over the other. Thus the planes were not only cut and abolished, but their relationships became more active.”

It was in 1933 that he returned to his long cherished aim of painting a picture with a uniform pattern surface minus any linear structure that could organise the work. It consisted solely of primary colours. It was this fusion of lines and colour that enabled him to truly abandon the link with the traditional art and painting, thus opening up a new dimension in painting!

This year produced the first double lines witnessed in Composition with Coloured Square (1933). The double line is a compromise of the grid arrangement and a simple, single black line. Normally the lines would have their own form, separating them from the rest of the work, but the presence of the second line prevents them from standing out as their own, clearly defined entity. The painting, although looking simple, is still complex as the structure is not immediately present. 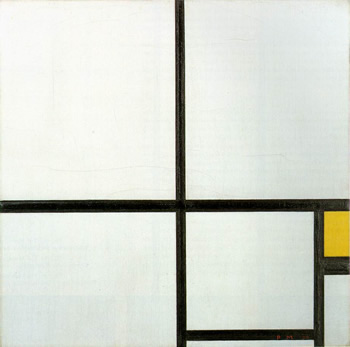