World events seemed to answer the new visual disturbance of Mondrian's art. He fled to London in 1938 and to New York in 1940, taking little with him except his paintings and drawings. For his first solo New York show, in 1942, he reworked eleven paintings to give them "more boogie-woogie," as he explained, referring to his latest musical discovery. And he inscribed them with two dates to record the strange circumstance of revision after several years.

Now that Mondrian had left Europe and Paris, he was able to return to his earlier discoveries made in 1933. Now he combined the black lines with coloured lines, instantly making the classical effects disappear. Images of playfulness are once again evident in his work and are evident in pieces such as Composition with Red, Yellow and Blue and Composition with Black, White, Yellow and Red (1939 – 1942). The intersecting coloured lines produce a brilliant, flickering effect which became more evident as he progressed further with his paintings. Many were reworked to include more of this style; “Boogie Woogie” as he termed it after the music for which he had developed a passion. The flickering was an attempt to capture the movement of the times, the changes that were afoot.

New York, New York was one of the first paintings to make greater use of coloured lines intersecting with a black grid giving the illusion of the coloured lines coming into the picture from the outside to join the black lines within the painting. 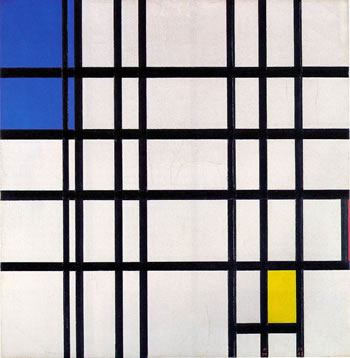