It was not until 1921 that he returned to the studio to paint, and this would prove to be his defining year, the year in which he succeeded in developing a new style which even now is instantly recognisable as Mondrian. This style can be summed up by one thing: brilliant primary colours of red, yellow and blue.

These primary colours had been present in his earlier work from 1909 – 1911, but after this point they disappear and are abruptly cut off. They were replaced by browns and greys, but now these colours made a huge resurgence. At first the colours were slightly broken tones such as yellowish-green or orange with grey and blue hues for the white ground. By the end of this year, the paintings had become uniformly white with pure colours. This turn of events can probably be linked to another tragic event in his life for his father died this year.

The seeds for these radical ideas were not new to Mondrian, for he had been discussing his own dissatisfaction with his work with van Doesburg since 1919. He had become disinterested in the regular grid paintings with there lack of variety and scale, balance and proportion. He attempted to capture the spirit of his earlier work from 1916/7 in paintings such as Composition with Light Colour Planes with Grey Lines (1919). Style would now replace the abstract and become the base for a much more colourful and ornamental art form.

Throughout 1921 Mondrian experimented with loosening his grid visually to give the appearance of motion. The tone and mood changed dramatically and many experiments were conducted on shape and form, and with arrangement of the colour planes and black lines. 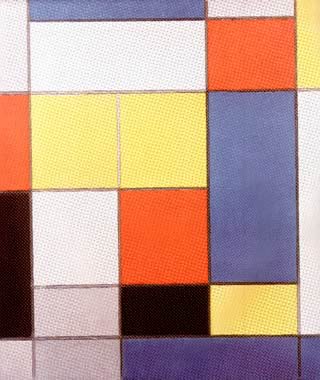