As time progressed and Mondrian’s style developed he found himself more and more in conflict with van Doesburg. Van Doesburg had pursued an architectural approach that was more forward looking. He had conceived modern architecture as an ensemble of colour planes in an abstract infinite plane. By doing this, he was now following the principles of construction; the mathematically calculated and constructed form was not bound to any specific material space. Mondrian could not accommodate this in his own logic and theories. He wanted his own paintings to be relevant in the natural spaces as art from past time had been. So it was inevitable that the two would split – it was simply down to a fundamental difference in theories and perception of space and form. In separating from van Doesburg, Mondrian also parted from De Stijl and no longer contributed to any of the projects.

In 1931 he created the Lozenge: Composition with Two Lines for the newly built Hilversum Town Hall which was designed by the architect Willem Marinus Dudok. The painting was a simple affair, two black lines on a white background representing the mathematically conceived, unconfined space that all modern architects and avant-garde designers were working with. Unfortunately the people of Hilversum did not appreciate this bleak and empty painting, and sold it to Amsterdam.

Mondrian placed an emphasis in the abstract quality of his work showing that it no longer related to anything representational. This caused a problem for Mondrian; he had arrived at a point in his development where he could go no further, so in his own view, what was there left to paint? 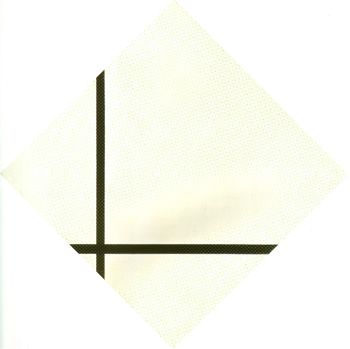