In Composition in Line, the opposition of figure and background, the very basis of spatial representation, is undone. The white space no longer lies behind the black elements but rather adds to the spherical figure they create. This was a big step toward the "logical consequence" of cubism: abstraction.

It was during these years of the war that he took an interest in society and actually bought himself a dinner jacket. He drew himself wearing it and sought out and made friends in the smart circles of Amsterdam society. Mondrian started to write to, and keep in contact with these people taking great pains to tell them about his art and he even managed to win over some of the critics; however they seemed to comment more on his ideas than his paintings.

During his time in Paris he had started collecting together his ideas for art theory in his sketch books, and now that he was home in the Netherlands, his literary ambitions grew. He spent his time sorting his ideas and putting them into words. It was around this time that he met Theo van Doesburg a painter and poet from Leyden. Van Doesburg was well versed in art theory and also had a thorough knowledge of the German philosophical tradition since Kant and Hegel. Mondrian shared his knowledge of the latest advancements in French art with him, and the two became inseparable. Between the two of them, they assembled a group of the best young artists, architects and designers in the Netherlands. 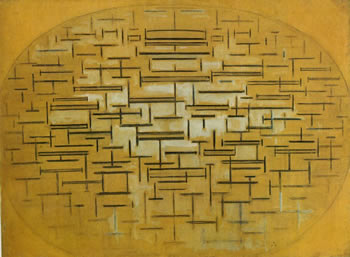